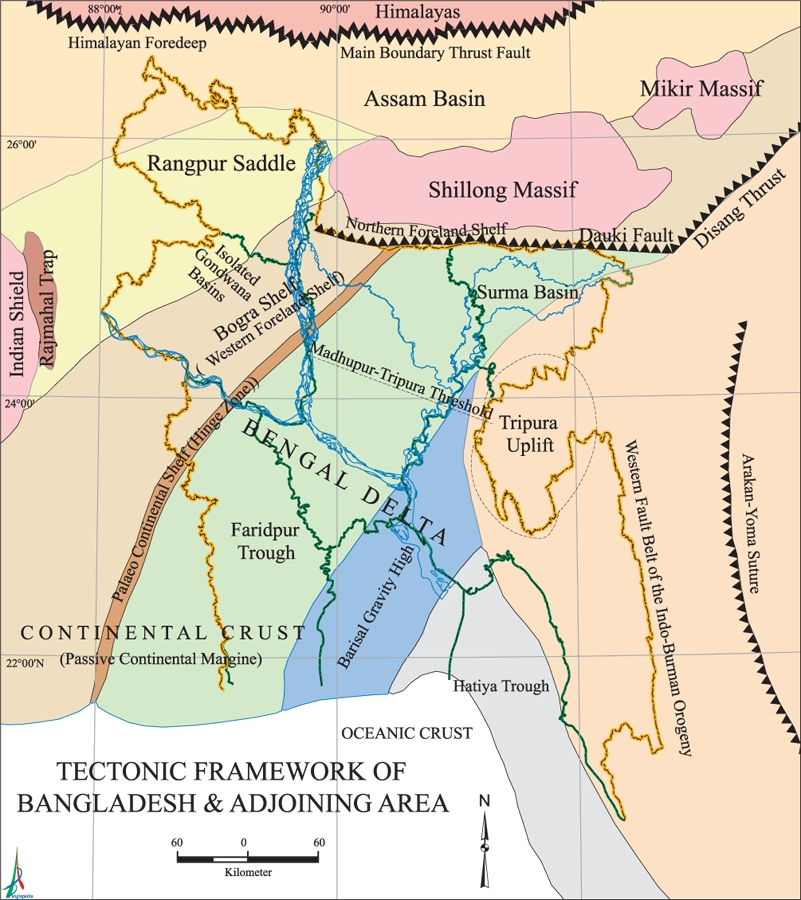 Tectonic Framework refers to the basic structural frame on which Bangladesh stands. It is essential to have a clear conception about the tectonic framework of Bangladesh in order to evaluate the prospect of mineral resources including oil and natural gas.

Bangladesh is divided into two major tectonic units: i) Stable Pre-Cambrian Platform in the northwest, and ii) Geosynclinal basin in the southeast. A third unit, a narrow northeast-southwest trending zone called the hinge zone separates the above two units almost through the middle of the country. This hinge zone is currently known as palaeo continental slope. [Sifatul Quader Chowdhury]

Bogra Shelf represents the southern slope of Rangpur Saddle which is a regional monocline plunging towards southeast gently to Hinge Zone. This zone marks the transition between the Rangpur Saddle and the Bengal Foredeep from depositional as well as structural point of view. The width of Bogra Shelf varies from 60-125 km up to the Hinge Zone and the thickness of the sedimentary sequence increases towards the southeast. Stanvac Oil Company (SVOC) carried out aeromagnetic and seismic surveys in the mid-fifties followed by two wells at Kuchma and bogra. Seismic contours on top of Eocene Limestone (Bogra limestone) show regional dip of 2-3° besides revealing a number of NE-SW trending faults of which bogra fault is the most prominent. The attitude of Sylhet Limestone most possibly reflects the surface of the Archean Basement. There is no closed anticlinal fold in this tectonic zone. The Bogra fault did not provide the seal to the structural trends at Kuchma and Bogra for accumulation of commercial hydrocarbons. [DK Guha]

Calcutta-Mymensingh Gravity High reflects a tectonic element known as Hinge Zone and more recently as palaeo continental slope in the framework of Bangladesh. The Hinge Zone is a narrow strip of about 25 km wide complex flexure zone, which separates the Bengal Foredeep from the shelf zone. It trends approximately N 30° E along the Calcutta-Pabna-Mymensingh gravity high and extends upto the western tip of Dauki fault. This zone is characterised by the sharp change in the dip of the basement rocks associated with deep-seated displacements in faults and is reflected on the gravity and magnetic anomalies. The Eocene limestone dips at about 20 in this zone as compared to 2-3 in the shelf zone. The seismic interpretation shows that the depth of the Sylhet Limestone - a strong seismic reflector - increases from 4000m to 9000m within a narrow zone of 25-km. During the subsurface interpretation of the south-eastern part of the West Bengal in India, a zone of flexure in the top of the Sylhet limestone was recognised which is the extension of the Hinge Zone in India.

Hinge Zone is connected with Bengal Foredeep by deep basement faults that probably started with the break up of Gondwanaland. Since then they have been repeatedly reactivated. In the northeast of Bangladesh the Hinge Zone turns to the east and seems to be connected with the Dauki Fault, probably by a series of east-west trending faults. [ASM Woobaidullah]

Geosynclinal Basin the geosynclinal basin in the southeast is characterised by the huge thickness (maximum of about 20 km near the basin centre) of clastic sedimentary rocks, mostly sandstone and shale of Tertiary age. It occupies the greater Dhaka-Faridpur-Noakhali-Sylhet [Silet]-Comilla [Kumilla]- Chittagong areas. The huge thickness of sediments in the basin is a result of tectonic mobility or instability of the areas causing rapid subsidence and sedimentation in a relatively short span of geologic time. The geosynclinal basin is subdivided into two parts ie fold belt in the east and a foredeep to the west.

Bengal Foredeep occupies the vast area between Hinge Line and Arakan Yoma Folded System and plays the most important role in the tectonic history of Bengal Basin. Tectonically, Bengal Foredeep can be divided into two major regions- (a) Western Platform Flank and (b) Eastern Folded Flank. The Western Platform flank is further subdivided into (a) Faridpur Trough (b) Barisal-Chandpur High (c) Hatiya Trough (d) Madhupur High and (e) Sylhet Trough.

Faridpur Trough situated adjacent to Hinge Zone is characterised by a general gravity low with development of Neogene sequence. Sylhet Limestone is 6500 m deep in area south of the confluence of the padma and the jamuna. Chalna and bagerhat are the notable structural highs of very low amplitude.

Hatiya Trough represents the deepest trough of Bengal Basin, which received highest accumulation of clastic sediments. The axis of Bengal Foredeep runs through the apex of Hatiya Trough. Shahbazpur (bhola), Kutubdia, Sangu and large number offshore structures are located here, of which Sangu is under production while Shahbazpur and Kutubdia are awaiting development. Madhupur High represented by Pleistocene terrace of Madhupur Garh separates Faridpur Trough from the Sylhet Trough (surma basin). Here, the basement is relatively uplifted as evident from gravity and aeromagnetic data. Morphological studies reveal a pronounced recent morphological upheaval east of Madhupur. Besides, Nagarpur dome, south of tangail and Nandina high showed that these are portions in the basement without deforming the sedimentary sequence overlying these features.

Barisal-Chandpur High interpreted as a gravity and magnetic anomaly caused by a magmatic body at great depth. This zone is located between Faridpur trough and Hatiya trough of the Bengal Foredeep. The width of the zone is about 60 km and apparently corresponds to an uplift of the sedimentary cover. A number of gravity anomalies are spread over this zone. A paleo-high stretching from Barisal-Chandpur High in the NE direction has been presumed and the ridge was interpreted to turn south of Barisal-Chandpur High in north-south direction merging with the Ninety east ridge. There is no definite evidence for existence of such a ridge dividing the Bengal Foredeep into two parts. patharghata, muladi, chandpur, lakshmipur [Laxmipur], munshiganj, Kamta and daudkandi are the main anticlinal structures of this zone. Muladi wells failed to yield positive result in respect of commercial accumulation of hydrocarbons due to lack of northern closure. This zone has not been sufficiently investigated by seismic surveys.

Hatiya Trough east of this zone is the deepest trough of Bengal Basin which opens southwards to the bay of bengal. The sedimentary sequence here is over 20 km thick. Offshore gas fields of Kutubdia and Sangu and on-shore gas fields at Sahbazpur (bhola) and begumganj belong to Hatiya Trough. Likewise Faridpur Trough has also great accumulation of sediment fill beyond the Hinge Zone. Barisal-Chandpur High situated between two deeply subsided troughs and specially Hatiya Trough with a number of gas fields are considered prospective for oil and gas in closed structures.

There are also a number of geomorphologic recent upheavals in this tectonic zone with NE-SW trends - Amtoli area and Barisal-Muladi zone. [DK Guha]

Madhupur or Mymensingh High the area represents an undulated topography slightly elevated from the adjacent active floodplain. At madhupur, tectonic disturbances can easily be observed where Dupi Tila sand is exposed under the Madhupur Formation.

Most of the authors believe that the madhupur tract represents a tectonically uplifted surface. A few also believe that the area was uplifted in very recent time and referred to the earthquake of 1762 as the Madhupur tract occurs along the axis of the belt of ‘Volcano action’, extends in a north-western direction through chittagong and dhaka. They considered numerous low lakes in the Sylhet basin to be caused by subsidence compensatory to the elevation of the Madhupur tract. According to their belief, the uplift of Madhupur tract resulted the diversion of the brahmaputra River.

At present, based on some radiocarbon dating, it is thought that with some exceptions (where local block uplift is prominent), elevation of the Madhupur surface as a whole is quite apparent. Late Pleistocene monsoon climatic episodes caused a tremendous current flow over the Bengal plain and resulted dissection of the initial Madhupur surface. With the culmination of the amplified monsoon rainfall, the dissected valleys were filled up with the Holocene sediments created a geomorphic level at some lower position than the initial geomorphic surface. [Md Hussain Monsur]

Sylhet Trough situated on the southern side of the Shillong Massif and corresponds to the vast low lands of Surma Valley with numerous swamps (haors) where absolute elevation marks even below the sea level. It is a sub-basin of the Bengal Foredeep in the northeastern part of Bangladesh and is characterised by a very pronounced, vast, closed negative gravity anomaly up to 84 mgl (Milligal). Shillong Massif forms the northern boundary of Sylhet Trough while the great Dauki Fault separates the trough from the Massif. The Trough is bounded on the east and southeast by the sub-meridional trending folded belt of Assam and Tripura as the frontal deformation zone of Indo-Burman Ranges.

Indian Platform bounds the trough from the west while it is open in the southwest to the main part of Bengal Basin. It is an oval shaped trough about 130 km long and 60 km wide. Sub-meridional trending anticlinal folds of Chittagong-Tripura Folded Belt gradually plunge northward to the Sylhet Trough. In cross-section the Sylhet Trough is sharply asymmetrical with comparatively gentle southern and steep faulted northern slope. Dauki Fault with 5 km wide fault zone forms the contact between Shillong Massif and Sylhet Trough. The evolution of Sylhet Trough includes (i) a passive continental margin (Pre-Oligocene) to (ii) a foreland basin linked to the Indo-Burman Ranges (Oligocene and Miolene) to (iii) a foreland basin linked to south-directed over thrusting of Shillong Plateau (Pliocene-Holocene). The anticlinal folds of Habiganj, Rashidpur, Bibiana, Maulvi Bazar, Katalkandi, Fenchuganj, Harargaj, Patharia, Beani Bazar (Mama Bhagna) and Kailas Tila, which occupy the southern rim of Sylhet Trough have sub-meridional trend in contrast to sub- latitudinal trending Chhatak, Jalalabad, Sylhet, Dupi Tila and Jatinga structures. These two structural trends form a syntaxial pattern at the northeastern tip of Sylhet Trough. The Neogene sediments have excellent development in Sylhet Trough while the Paleogenes are at greater depths.

Sylhet Trough is the most prospective petroliferous province of Bangladesh with 10 gas fields (Chhatak, Jalalabad, Sylhet, Kailas Tila, Beani Bazar, Fenchuganj, Rashidpur, Maulvi Bazar, Bibiana and Habiganj) of which Jalalabad, Sylhet, Kailas Tila, Rashidpur and Habiganj are producing now about 1000 million cubic feet per day (MMCFD) for generation of power, manufacture of fertiliser besides meeting the industrial, commercial and domestic needs to a great extent thus contributing immensely to the economic development of Bangladesh.

Folded Belt represents the most prominent tectonic element of Bengal Foredeep with general sub-meridional trending hills parallel to the Arakan Yoma Folded System. Folded belt extends within Bangladesh for 450 km (N-S) and about 150 km wide covering an area of 35,000 sq km of on-shore area. A large number of narrow, elongated N-S trending folds of the eastern part of Bangladesh (Sylhet and Chittagong Divisions), Tripura, southern part of Assam, Mizoram and Myanmar territory adjacent to S-E of the Chittagong Hill Tracts occupy the Folded Belt west of the Arakan Yoma Folded System. The folds are characterised by ridge forming, box-like in cross section, high amplitude with variable width and lie en-echelon with the adjacent structures. The elevation of these elongated anticlinal folds in Bangladesh ranges from 100 -1,000m. Some of the structures are faulted and thrusted and the intensity of folding increases gradually from west to east. Consequently, the structures of the eastern part are tightly folded, faulted and thrusted with narrower synclines between them.

The Neogene sedimentary sequence developed here are largely unfossiliferous and consists mainly of the alteration of shales, clays, claystones, siltstones and sandstones with occasional intra-formational conglomerates which can be subdivided into nine formations on the basis of lithology.

It is recently reported that turbidity facies assemblage have been recorded in Bhuban rocks in Sitapahar anticline representing Bouma sequence with 5 well defined cycles which need confirmation by extensive further investigation.

Paleocene sediments are subsided to greater depths and have not been encountered in any well except Atgram IX which penetrated 860m of Renji and 260m of Jenam sequence of Barail Group. The depth of basement is not known but will possibly be of the range of not less than 20 km.