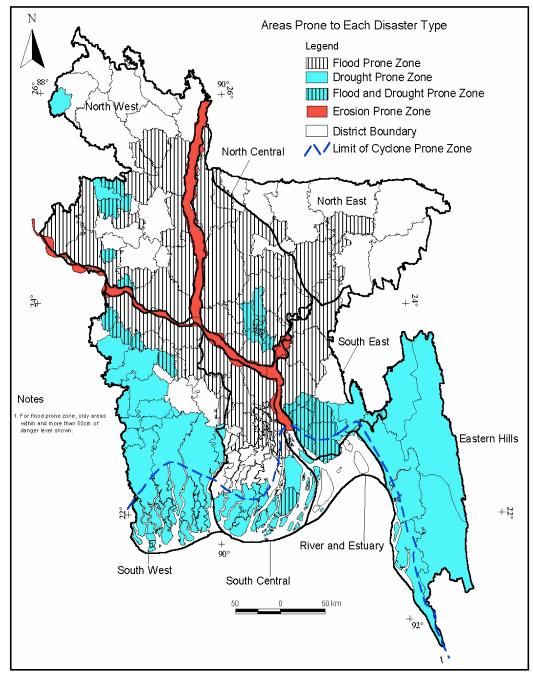 Bangladesh is prone to many kinds of natural disasters. Of these natural disasters, the most important ones to mention are tropical cyclones with associated storm-surges, floods, droughts, tornadoes and river-bank erosions. Besides these disastrous weather systems, the occurrences of earthquakes at times make significant impact both on social life and topography of the country.

Cyclones
Tropical cyclones are frequent in the Bay of Bengal. Immediately pre-monsoon, and immediately post-monsoon periods are the seasons when cyclones and depressions form in the Bay of Bengal. Bangladesh has the worst record of cyclones and storm surges in the world. They destroy crops, damage infrastructure, homes and vital installations, and cause widespread health hazards for the people. Storm surges create both short and long-term problems because the salt water ruins the soils. They occur frequently and in such magnitude in Bangladesh that they have multiplied the problem of poverty and seriously challenged the efforts of the country towards self-reliance. Occasionally, tropical cyclones also cause enormous numbers of casualties. The cyclone disasters in 1970 ( 300,000 dead) and 1991 (138,000 dead) are among the worst natural disasters in the world.

Floods
Floods in Bangladesh are a complex phenomenon. They pose enormous threats to the population, but at the same time, moderate floods contribute to the fertility of the land. Extensive river floods cause great disruption and damage to infrastructure and loss of crops. Floods indirectly contribute to the concentration of land ownership and wealth as small landowners are forced to sell their property as a result of flooding. Bangladesh has always experienced some degree of flooding. Apart from a few small hills in the north and south east, the country is totally flat. Very little of the country is more than 20 meters above sea level. In a normal monsoon, one third of its 22 million acres of cultivated land is flooded. Flooding is a fact of life to the people of Bangladesh and they demonstrate great resilience and skill in coping with it. Monsoon flooding, which normally affects about one third of the country, is regarded by farmers as beneficial. They have developed agricultural practices to make use of the floodwater for rice and jute as well as for fisheries. It is when flooding increases beyond the normal level when problem arise.

In August - September, 1988, Bangladesh experienced an unprecedented flood causing loss of 1657 human lives and again during July - September, 1998 Bangladesh experienced another flood which is the worst in the living memory both in respect of its long duration and water level/ Almost two-third area of the country was inundated causing widespread damage to the economy of the country ever before. It took the life of 918 people.

Droughts
Bangladesh experiences Drought conditions at some intervals of time. Records show that Bangladesh had, in the recent past, drought conditions having disastrous crop failure. In 1979 Bangladesh passed through a major drought year which was trend by many as the worst in the recent past. Droughts of 1957 and 1972 were of severe nature also. Crop failure by drought comes as a significant strain also to the socio-economic structure of Bangladesh.

Earthquakes
Bangladesh has potentiality for earthquake hazards as per the recorded history. Analysis of the long period earthquake data shows that Bangladesh as a whole lies in the earthquake zone, of which two-third comes under major and moderate fault. Veryrecently on 21 November, 1997 an earthquake with an intensity of 6.1 on Rickter Scale shooks the entire Chittagong region, the jolt of which was felt upto Dhaka. As a result, a five stories building in Chittagong sank upto first floor causing human death toll to the tune of 23 and sizeable property destruction.

River Bank Erosion
Along the courses of the mighty rivers, like Jamuna, Meghna, etc. erosion every year takes away chunks of land causing displacement of large number of people and losses of properties. Due to recurrence of such erosion displaced people are forced to come to cities for their earning. This adds to the growth of slum areas, scarcity of land in the cities and also create various social problems.

Tropical Cyclones
Tropical cyclones generally strike Bangladesh in two seasons, March through July and September through December, with the greatest majority of storms arriving in May and October.

Tornadoes
Tornadoes cause localised devastation and demand an immediate response. A severe tornado hit Tangail district of the country on 13th May 1996 causing 540 death and injuring about 34,000 people. Loss of cattle heads and damages to homes were also substantial.