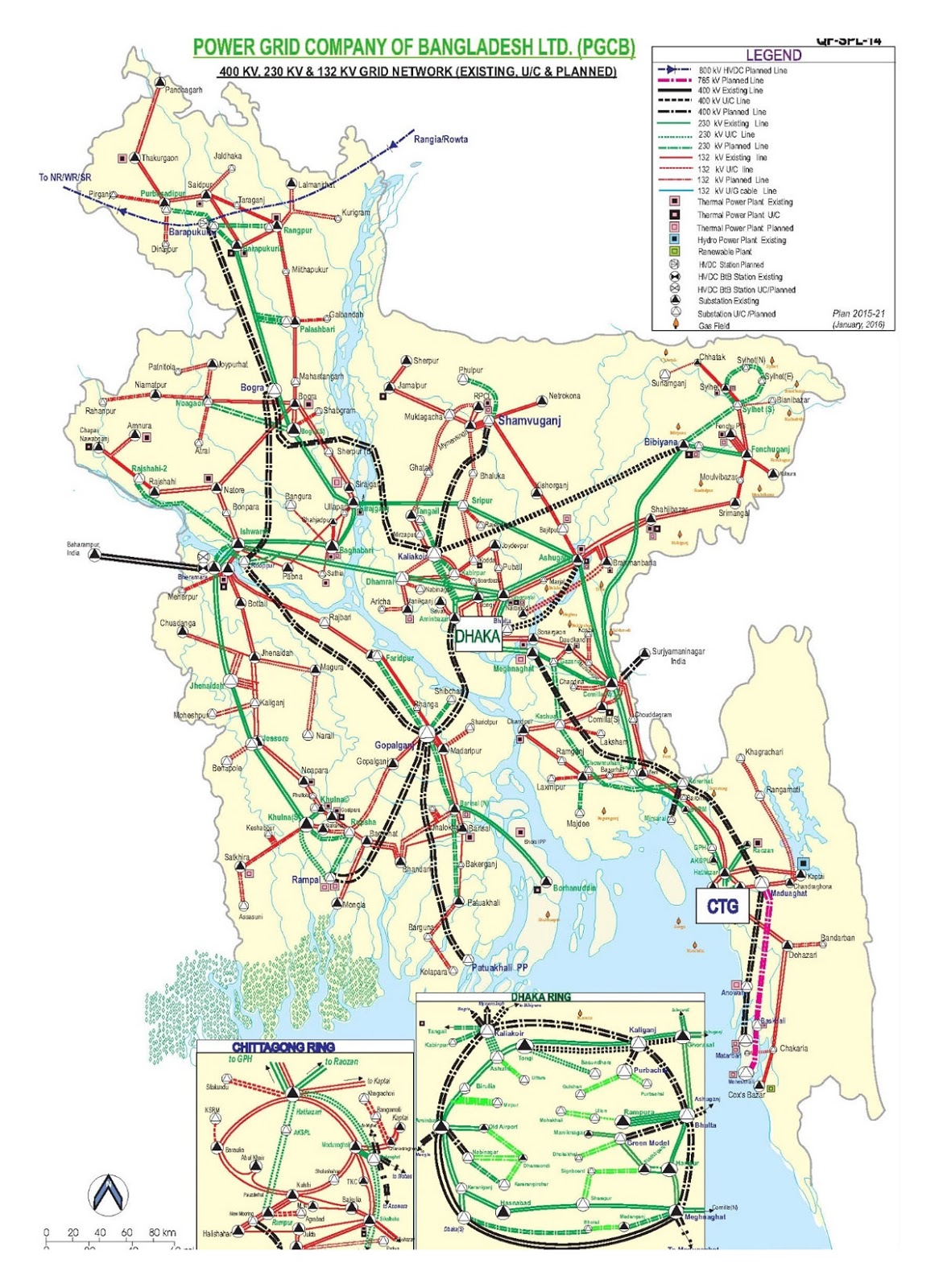 Power System  is an integrated network that interconnects the installations for generation, transmission and distribution of electricity. In Bangladesh electricity is generated at 50 Hertz frequency and at a nominal voltage of 11 KV (Kilo Volts) or 15 KV to be stepped up through transformers to 132 kV or 230 kV for feeding to the grid i.e. a high voltage transmission network that transmits the power to grid substation transformers to be stepped down at 33 kV. 11 kV and 0.4 kV for delivery to the consumers of various categories.

As of the year 2009, Bangladesh power grid comprises approximately 2314 circuit km (kilometres) 230 kV lines, 5533 circuit km 132 kV lines and 167 circuit km 66 kV transmission lines. The 230 kV and 66 kV lines are connected with the 132 kV network through 230/132 kV and 132/66 kV tie-bus transformers respectively. There are 85 grid substations that receive power from high voltage transmission lines and deliver it to the consumers through tens of thousands of kilometres 33 kV, 11 KV and 0.4 kV distribution lines.

In Bangladesh presently the state owned Bangladesh Power Development Board (BPDB) generates about 75% of the power supplied. The Independent Power Producers (IPPs) and Rental Power Plants (RPPs) which are mainly the joint ventures of local and multinational companies generate the remaining 25% and sell it to BPDB through the grid. BPDB in its turn sells power to the distribution entities. However, a few small IPPs supply power directly to Rural Electrification Boards (REB) 33 kV distribution network. The grid system is owned and operated by a public company named Power Grid Company of Bangladesh (PGCB) Limited. The responsibility of distributing electricity across the country is shared by various public companies like BPDB, REB, dhaka power distribution company (DPDC), Dhaka Electricity Supply Company (DESCO), West Zone Power Distribution Company (WZPDCO) each having respective franchise area.

Bangladesh has two distinct geographical zones, the east zone and the west zone separated by the Padma-Jamuna river system. Major power generation takes place in the east zone that has hydropower facilities and a good number of natural gas fields. The west zone has several coal mines of which only Barapukuria has so far been developed and the coal extracted from it is utilised in a power plant having an installed capacity of 250 MW (Mega Watts) only. Besides coal, furnace oil imported from abroad and gas supplied from the east zone through a pipe line underneath the bridge over the river Jamuna are also used for generating limited power in the west zone. Naturally the west zone is a generation deficit area and it has to depend upon a power transfer from the east zone to the tune of about 500 MW through two east-west interconnecting transmission lines operating at 230 kV. This also restricts the scope of independently operating the systems in two zones to contain a blackout in the event of a fault.

Despite various incentives being offered by the government for private and foreign initiatives and investments Bangladesh is facing a chronic problem of fund constraints and inadequate fuel supply to undertake timely overhauling of the old power plants and installing new plants to cater to a demand that has been growing at the rate of approximately 10% per annum. Besides this ageing, dreading and forced outages of the existing plants and low pressure of gas are causing acute generation shortage. The generation of power in the east and the west zone as of the year 2009 were around 3300 MW and 600 MW respectively against a total peak demand of about 5000 MW on a typical summer day. Obviously the grid operator has to resort to massive load shedding to the tune of 1000 MW to keep the system functional and stable.

Nevertheless, government initiatives for setting up of more coal fired power plants and a nuclear power plant in the west zone within a decade besides its attempts to import hydropower from neighboring countries such as Nepal, Bhutan or Myanmar and to promote small scale solar power in the off-grid rural places may bring a hope for the power system in Bangladesh in near future.