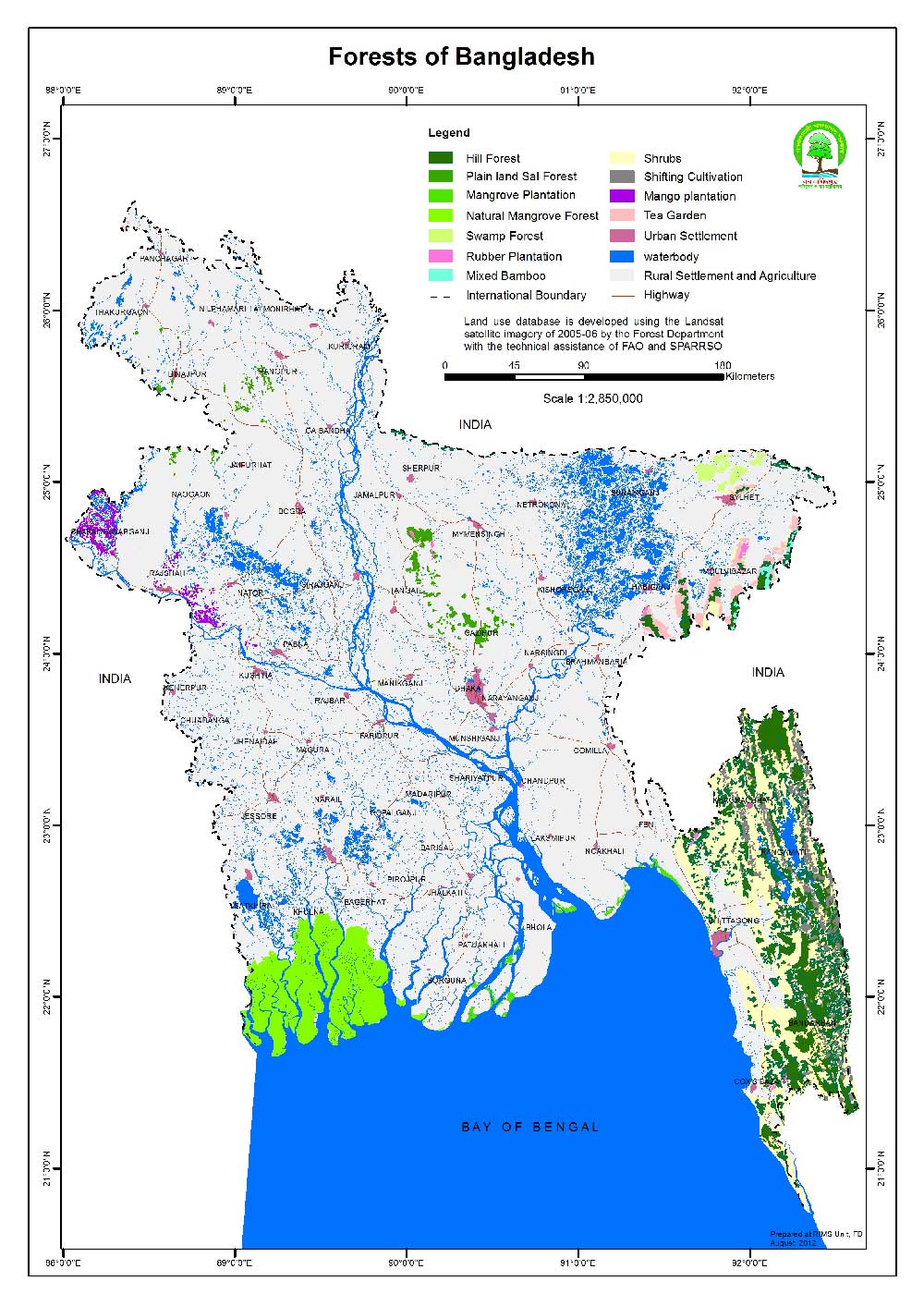 The forests of Bangladesh are broadly classified into three categories based on the topographic conditions (a) Hill forests, (b) Plain Sal forests, and (c) Mangrove Littoral forests. The hill forests contain most of the productive forest areas and plain Sal forests the least. In terms of forest land under forestry use (Table 3 at Appendix), the Hill forests contribute 508, 991 ha (45.4%) followed by the Littoral Mangrove Forests and Coastal Afforestation extending over 489,872 ha (43.7%), and Plain Sal Forest account for the rest 121, 884 ha (10.9%) of the forest area.
Hill Forests

(a) The Hill Forests

The Hill Forests are ecologically more important and constitute more than half of the forests of the country. Ecologically, these hill forests constitute a transition between the Indian subcontinent floristic region and the Indo-China floristic region. They consist of moist tropical evergreen and semi-evergreen forests, which extend from Teknaf Peninsula, north along Myanmar border to the Chittagong Hills and Hill Tracts and the low hills in Sylhet district. The "Forest Types of Pakistan" by Champion, Seth and Khatak provides detailed information on these hill forests.

These are tall multistoried forests on hilly and alluvial flats. The dominant trees are about 60-65 meters high and consist of Depterocarpus species (Garjan), Swintonia floribunda (Civit), Chundal and Narikeli. Middle and lowerstory story of trees is present with diverse understory.

Such forests occur on the edge of rivers and in low lying areas. Trees are interspersed with large open patches of grasses, reeds and bananas. The main tree species are deciduous like Anthocephalus chinensis (Kadam), Trewia nudiflora (Pitali) and Duabanga grandiflora (Bandarhola).

Bamboo is a very important non-wood forest resource in Bangladesh. About 70% of bamboo resources are on private lands in the villages. The rest of the bamboo is in forest areas but it accounts for only about 20% of annual national supply of bamboo. Forests in Chittagong Hill Districts are the richest in bamboo, followed by Sylhet district. The bamboo in forest areas of Bangladesh is managed on a 3 to 4 year cutting cycle. Bamboo is present either as single or mixture of different bamboo species in almost all the forests in the Chittagong Hill Tracts or in Sylhet Division. Eight species are indigenous and four (Muli, Mitenga, Daloo and Orah) of them are commercially important. The Melocanna baccifera (Muli) bamboo is most predominant and occurs either as a pure stand or in association with other species over extensive areas. Muli prefers well drained sites while the other species prefer shaded moist sites. Bamboo also occurs as an understory specie in many of the other forest types.

The characteristic tree species is Barringtonia acutangula (Hijal), and the characteristic grasses and reed are Phragmites karka (which predominates near water), Erianthus revenea (Ekhra) and Saccharum spontaneum. (Khagra). A variety of grassland and wetland ecosystems are found in such areas like wetland areas of Sylhet District. The tree cover is greatly reduced but the grassland and wetlands remain very important for many species of birds and fish. Some small patches of freshwater swamp forest can also be seen in Sunamganj district and at Pasua Haor in Gurmar Beel.

Although the fresh water swamp forests described above have nearly disappeared, a vast area of fresh water wetlands exists in the country. The wetlands include lakes, the Ganges-Brahmaputra flood plain, river estuaries and at least 47 major haors and 6,300 beels. They occupy about half the land area of the country in the monsoon season. These fresh water wetlands support a wide variety of species of fauna and flora, both terrestrial and aquatic. For example, Haor Basin of Sylhet and eastern Mymensingh have special biological significance. This area is described as "a wetland ecosystem of outstanding international significance" especially as waterfowl habitats. These wetlands provide habitat for about 125 species of resident and migratory water birds as well as a diversity of aquatic and terrestrial plants, aquatic invertebrates, fish, mammals, amphibians and reptiles. In the winter they support 100,000-150,000 ducks and provide refuge for many species rare elsewhere in the country. At present, no fresh water wetlands are protected and there is no management plan for such wetlands.

Many ecologists do not consider the Savanna as a natural ecosystem. It is dominated by thick Impretta species (Sungrass). It is more common in Unclassified State Forest (USF) areas in the Chittagong Hill Tracts.

Plain Sal forests are Tropical Moist Deciduous type of forests. Such forests are normally present in most of the lowlands and floodplains in the central and western parts of the country. Plain Sal forests have been dramatically reduced in area and now exist only in a number of widely scattered and degraded patches. The forests consist of patches of Sal coppice occasionally with other tree species. These forests lie in the districts of Dhaka, Tangail, Mymensingh, Rangpur, Dinajpur and Rajshahi. The district of Comilla also has a small patch of Sal Forest. A large proportion of land under plain Sal forest is under the possession of encroachers. These forests are generally categorized in following two subtypes (Pure Sal, and Mixed Sal) on the basis of soil and tree canopy.

In past, these forests, even under natural conditions, had a canopy that was nearly 100 percent Sal and grew on shallow, dry and less productive soils in the region to the north of Dhaka and was frequently burned. Such pure Sal forests now exist only in coppice form with sparse understory and the relatively few number of species.

These forests are dominated by Sal in the canopy but include many other associated species like Terminalia bellerica, Albizzia procera, Lagerstroemia spp and Ficus species. They grow on the deeper, moister and more productive soils of the Madhupur and Barind tract. The understory is more complex and includes a variety of deciduous and evergreen species. The flora of the Barind Tract in this Sal forest type includes about 271 species out of which 41 are tree species.

Champion, Seth and Khatak (1955) classify these forests as Tropical Moist Deciduous Forests and subdivide the same into two sub-types; (a) Moist Sal forests and (b) Sal Scrub Forests. The Moist Sal forests are severely depleted leaving some sporadic intact patches of natural and coppiced Sal forests. The Sal scrub forests are the result of extreme human interference. The Sal has been coppiced many times and many stumps have lost their coppicing power, creating small and big blanks.

These forest areas are normally divided into following three groups (Sunderbans, Coastal Char forests, Coastal Area from Chokoria to Teknaf) to describe the vegetation at the southern boundary of Bangladesh.

The Sundarbans are the mangrove forests of Bangladesh, lying at the southern extremity of the Ganges River Delta bordering the Bay of Bengal. The forests extend to about 80 km north of the sea. The forests stretch from the Baleswar River on the east to the Hoogly River. The littoral forests normally form three distinct belts. The outer fringe near the sea consists of pure mangroves, which in the Sundarbans, is very limited, though Goran forms nearly forest on the higher grounds. The intermediate belt has various trees mixed with mangroves, with or without Sundri. The inner belt is of pure or nearly pure Sundri.

The slightly saline zone includes north-east part of the forest, which receives fresh water supply from the Ganges and supports the best stand growing upto a height of 20 meters. The dominant specie is Heritiera fomes with varying proportion of Excoecaria agallocha (Gewa). The proportion of Gewa increases and of Heritiera decreases, as one proceeds to the west and south. The species next in importance is Xylocarpus mekongensis (Passur), which frequently grows with Bruguiera gymnorrhiza (Kankra). Beneath Sundri are Cynometra ramiflora (Singra)on comparatively dry soils, and Amoora cucullata (Amur) on moist soils. Ceriops decandra (Goran) becomes the principal understory in more saline areas. Nypa fruticans (Golpatta) is plentiful on the banks of channels and creeks.

The moderately saline zone is in the middle portion of the forest. The predominant crop consists of Heritiera fomes and Gewa. Sundri decreases towards west and south. Passur, Kankra and Avicennia officinalis (Baen) are unevenly distributed over the entire area and Golpatta is plentiful.

The south and western part of the forest has the strongly saline zone. With increase in salinity the quality of the forest deteriorates and height hardly exceeds 7 meters. The forest consists mainly of sparsely spaced Gewa and over dense Goran interspersed with dense patches of Phoenix paludosa (Hantal) on the drier soils. Xylocarpus granatum (Dhundal), Passur and Kankra occur sporadically throughout the area. Golpatta is scarce.

The coastal area of Bangladesh west of the Sundarbans from the Haringhata River to Sandwip Island is characterized by rapidly accreting sand and mudflats and low lying offshore islands in the mouth of the Ganges River. These newly accreted lands are in early successional stage of mangrove forest following deposition of the silt and sand washed down by the rivers. Sonneratia apetala (Keora) is the common pioneer tree specie. As these stands decline, Gewa, Sundri, Baen and other species take over the sites.

The rich intertidal mudflats are extremely important as wintering areas for migratory waterfowl. Surveys have counted over 100,000 birds of 61 species. The area gains international significance because at least three globally threatened species use the area in significant numbers. About 300 Tringa gutiffer (Nordmann's Greenshank) live on mudflats near Jiryiradwip. This number accounts for an estimated 30 percent of the world population of the species. This area supports about 257 of the very rare and globally threatened Eurynorhynchus pygmaeus (Spoonbilled Sandpipers) the largest concentration of this specie, away from its breeding ground. Two more threatened species Limnodromus semipalmatus (Asian Dowitcher) and Rynchops albicollis (Indian Skimmer) have been located in this area,

The coastline of Bangladesh to the south of Chittagong includes several estuaries and the offshore islands of Kutubdia, Sonadia and Moheshkhali. In the past, this area was covered with mangrove forest and provided habitat for a rich variety of invertebrates, resident and migratory waterfowl and shore birds, gulls and tens. Most of this forest has been cleared and is used either as shrimp farms or for other aquaculture projects. Many of them have failed economically or were destroyed or badly damaged by the 1991 cyclone.