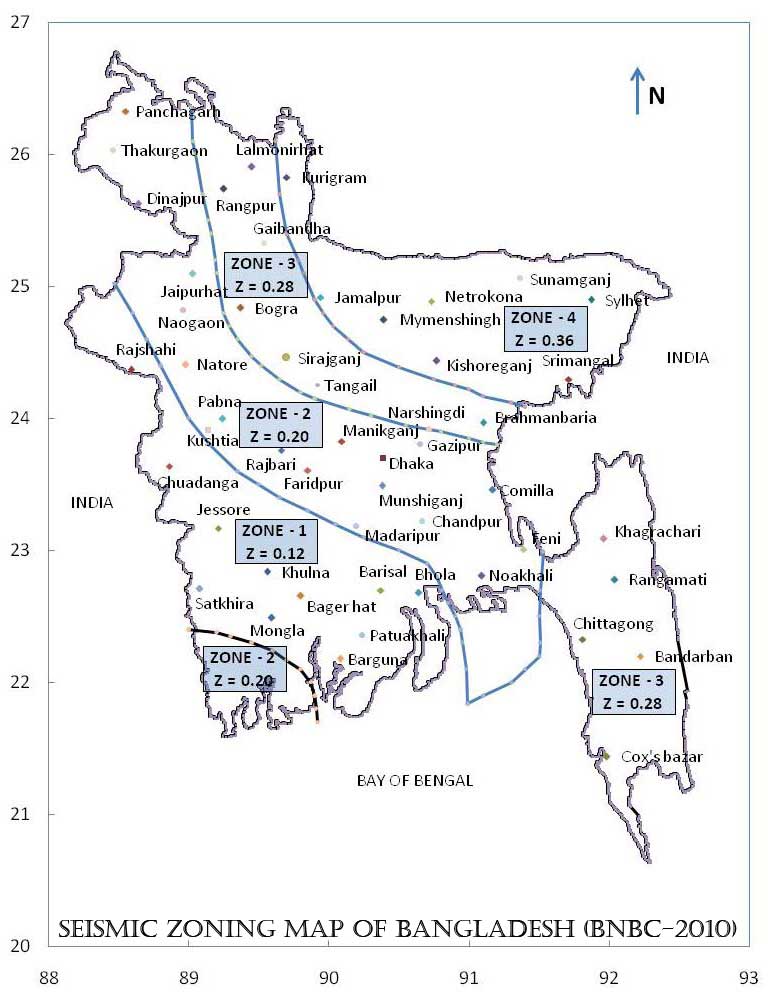 Bangladesh can be affected by moderate to strong earthquake events due to its proximity to the collision boundary of the Northeast moving Indian plate and Eurasian Plate. Strong historical earthquakes with magnitude greater than 7.0 have affected parts of Bangladesh in the last 150 years, some of them had their epicenters within the country.

The intent of the seismic zoning map is to give an indication of the Maximum Considered Earthquake (MCE) motion at different parts of the country. In probabilistic terms, the MCE motion may be considered to correspond to having a 2% probability of exceedance within a period of 50 years. The country has been divided into four seismic zones with different levels of ground motion. Following table includes a description of the four seismic zones.

HISTORY OF EARTHQUAKE INCIDENTS IN AND AROUND BANGLADESH

Accurate historical information on earthquakes is very important in evaluating the seismicity of Bangladesh in close coincidences with the geotectonic elements. Information on earthquakes in and around Bangladesh is available for the last 250 years. The earthquake record suggests that since 1900 more than 100 moderate to large earthquakes occurred in Bangladesh, out of which more than 65 events occurred after 1960. This brings to light an increased frequency of earthquakes in the last 30 years. This increase in earthquake activity is an indication of fresh tectonic activity or propagation of fractures from the adjacent seismic zones. Before the coming of the Europeans, there was no definite record of earthquakes. Following is a chronology of important earthquakes from 1548.

1548
- The first recorded earthquake was a terrible one. Sylhet and Chittagong were violently shaken; the earth opened in many places and threw up water and mud of a Sulphurous smell.

1642
- More severe damage occurred in Sylhet district. Buildings were cracked but there was no loss of life.

1663
- Severe earthquake in assam, which continued for half an hour. Sylhet district was not free from its shock.

1762
- The great earthquake of April 2, which raised the coast of Foul island by 2.74m and the northwest coast of Chedua island by 6.71m above sea level and also caused a permanent submergence of 155.40 sq km near Chittagong. The earthquake proved very violent in Dhaka and along the eastern bank of the meghna as far as Chittagong. In Dhaka 500 persons lost their lives, the rivers and jheels were agitated and raised high above their usual levels and when they receded their banks were strewn with dead fish. A large river dried up, a tract of land sank and 200 people with all their cattle were lost. Two volcanoes were said to have opened in the Sitakunda hills.

1865
- Terrible shock was felt, during the second earthquake occurred in the winter of 1865, although no serious damage occurred.

1869
- Known as Cachar Earthquake. Severely felt in Sylhet but no loss of life. The steeple of the church was shattered, the walls of the courthouse and the circuit bungalow cracked and in the eastern part of the district the banks of many rivers caved in.

1885
- Known as the Bengal Earthquake. Occurred on 14 July with 7.0 magnitude and the epicenter was at Manikganj. This event was generally associated with the deep-seated Jamuna Fault.

1889
- Occurred on 10 January with 7.5 magnitudes and the epicenter at Jaintia Hills. It affected Sylhet town and surrounding areas.

1897
- Known as the Great India Earthquake with a magnitude of 8.7 and epicenter at Shillong Plateau. The great earthquake occurred on 12 June at 5.15 pm, caused serious damage to masonry buildings in Sylhet town where the death toll rose to 545. This was due to the collapse of the masonry buildings. The tremor was felt throughout Bengal, from the south Lushai Hills on the east to Shahbad on the west. In Mymensingh, many public buildings of the district town, including the Justice House, were wrecked and very few of the two-storied brick-built houses belonging to zamindars survived. Heavy damage was done to the bridges on the Dhaka-Mymensingh railway and traffic was suspended for about a fortnight. The river communication of the district was seriously affected (brahmaputra). Loss of life was not great, but loss of property was estimated at five million Rupees. Rajshahi suffered severe shocks, especially on the eastern side, and 15 persons died. In Dhaka damage to property was heavy. In Tippera masonry buildings and old temples suffered a lot and the total damage was estimated at Rs 9,000.

1918
- Known as the Srimangal Earthquake. Occurred on 18 July with a magnitude of 7.6 and epicenter at Srimangal, Maulvi Bazar. Intense damage occurred in Srimangal, but in Dhaka only minor effects were observed.

1930
- Known as the Dhubri Earthquake. Occurred on 3 July with a magnitude of 7.1 and the epicenter at Dhubri, Assam. The earthquake caused major damage in the eastern parts of Rangpur district.

1950
- Known as the Assam Earthquake. Occurred on 15 August with a magnitude of 8.4 with the epicenter in Assam, India. The tremor was felt throughout Bangladesh but no damage was reported.

1997
- Occurred on 22 November in Chittagong with a magnitude of 6.0. It caused minor damage around Chittagong town.

1999
- Occurred on 22 July at Maheshkhali Island with the epicenter in the same place, a magnitude of 5.2. Severely felt around Maheshkhali island and the adjoining sea. Houses cracked and in some cases collapsed.