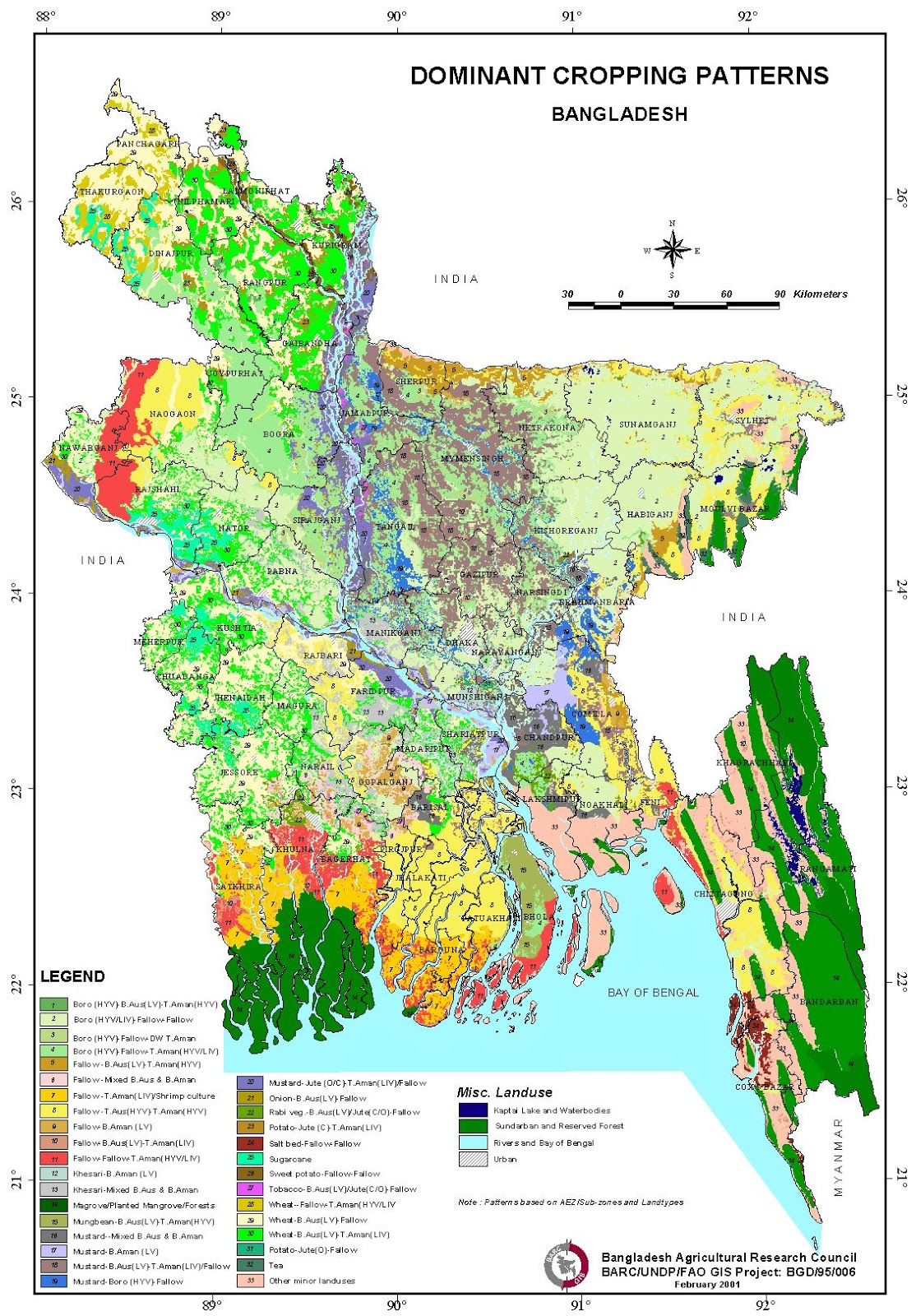 Cropping pattern is influenced by a host of factors. It is not that the decision about choice of land and crop hinges only on the size of the land owned by a farmer. The other important factors are: subsistence pressure, infrastructural facilities, information base and marketing opportunities. We observe that the dominant cropping pattern decades back was somewhat as follows: production of paddy later followed by keeping the land fallow. This pattern claimed about one-thirds of the total cultivated land in a year. Land under this pattern is much lower in recent years.

Another pattern to notice is paddy followed by paddy. In the past, the proportion of land under this pattern, on an average, hovered around one-thirds of the cultivated land. But there has been a significant decrease in the case of land under triple crops and, possibly, for this reason cropping intensity index has declined over time. Overall, it could be observed that the share of fallow land (after paddy or other crops) has increased from 39 per cent in the base year to 47 per cent in recent years. This is also an interesting development because; (a) farmers have learnt that land also need some rest and (b) economic solvency has reduced the urgency to pursue the earlier pattern.

In any case, our discussions on cropping pattern clearly forestall that 70 per cent of the cultivated land in rural Bangladesh is used only for paddy production and only 18 per cent goes to non-paddy crops. It shows that crop diversification till now could not emerge as an attractive option for farmers engaged in the war of food security.

Let us now look at the issue from the angle of farm size. First, in comparable periods of 1988 and 2008 for example, the main cropping pattern for small farmers was paddy followed by paddy. That means, after harvesting one paddy crop, farmers used to prepare for growing another paddy crop. But by 2008, marginal departure from the traditional pattern could be observed: instead of going for another paddy, farmers began to leave the land fallow. Of course, this pattern had been a favorite for medium and large farmers for a pretty long time. It appears that small farmers, for the sake of food security, have been tilting towards paddy followed by fallow option rather than paddy followed by paddy option. Second, triple-cropped land seems to be almost on the verge of non-existence.

In the past, there was a trend to grow another non-paddy crop after two consecutive paddy crops. The departure is definitely a sign of improvement as land are not being cultivated as intensively as before with averse impacts on soil fertility. Third, we notice that, cropping diversification is till now largely a "golden deer". Whatever feeble attempts at crop diversification have been made so far, those were mostly by the small and medium farmers. And finally, an inverse relationship between farm size and cropping intensity can be observed. For small farmers, the intensity declined from 174 in 1988 to 163 in 2004; for large farmers, the index moved down from 169 to 139, respectively.

An examination of the cropping pattern and cropping intensity by irrigation status would provide another dimension to the issue under discussion. In areas where the main sources of irrigation are rainfalls and surface water, the cropping pattern is paddy cultivation followed by no cultivation of crop. For example, in 2008, this pattern has claimed 57 per cent of the cultivated land as against 36 per cent in 1988. But this pattern does not seem to suit areas where underground water is mostly used for irrigation purposes. The difference between the two areas in terms of cropping patterns is mainly caused by the timely availability of water for irrigation. Second, consecutive two paddy crops are the pattern mainly for users of underground water, although over time the trend has diminished somewhat. For example, in 1988, 60 per cent of the land embraced this pattern - paddy followed by paddy - as against 46 per cent in recent times. In sharp contrast, however, in areas where rainfalls or surface water is used, the pattern of paddy followed by paddy claims 15-20 per cent of land.

As noted before, the difference is mainly due to availability of water: underground irrigation is more regular but irrigation is erratic where surface water and rainfalls dominate. Third, possibly for the reasons mentioned just before, a favourite pattern for the users of rainfalls and surface water is paddy followed by a non-paddy crop. Fourth, triple-cropped land had always been low and over time it reduced further. And finally, cropping intensity had always been highest in irrigated land, although it has been declining over time. The tendency to grow only one paddy in irrigated land has been declining but increasing in other modes

In the very low-lying areas, the cropping pattern is paddy cultivation followed by leaving the land fallow, although the pattern is changing over time. The reason behind such pattern could be the early arrival of flood - called early flood. In medium and high land, the main pattern is consecutive two paddy crops i.e. paddy followed by paddy. On the other hand, in all topographic condition, the general pattern is to keep land fallow after growing one non-paddy cop. Crop diversification, in whatever degree takes place, is evident in high and medium land as early flood is unfriendly to vegetables, fruits and cash crops. That is why crop diversification is the lowest in low land and relatively high in medium and high land.

By: Abdul Bayes,  a Professor of Economics at Jahangirnagar University. This email address is being protected from spambots. You need JavaScript enabled to view it.