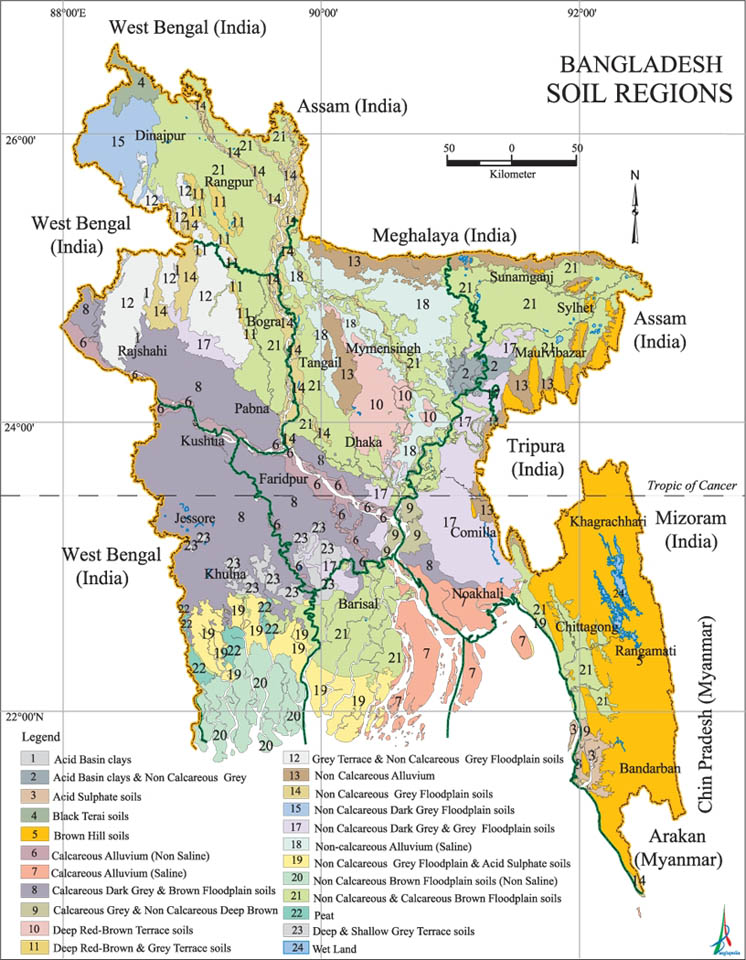 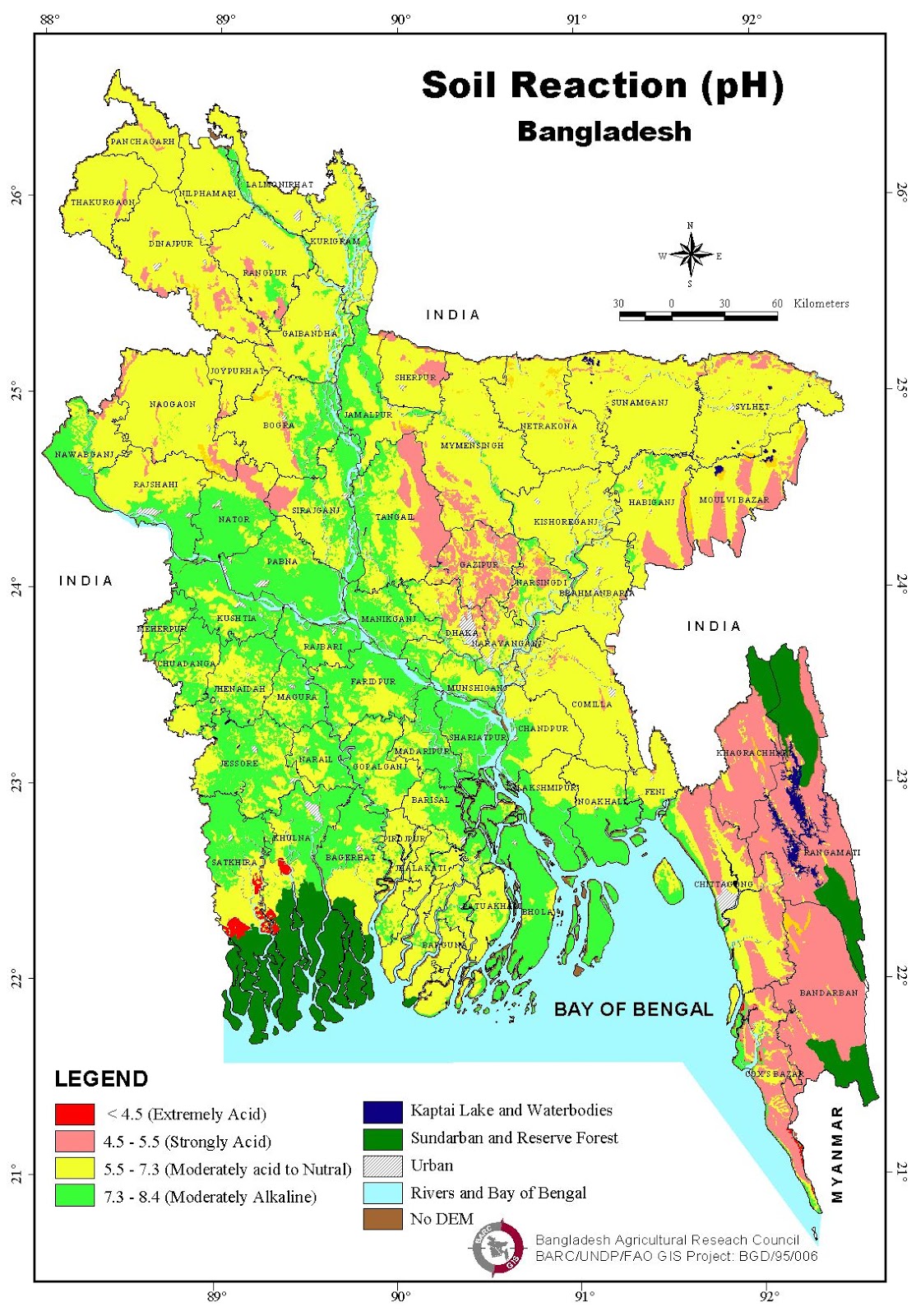 Acid Sulphate Soil  These soils occur near the coast on the Chittagong Coastal Plains and in the southwest of the Ganges Tidal Floodplain areas where the mangrove forest has been cleared for cultivation. These soils are also called Kosh soils in Chittagong. High acidity (pH 3.2-4.0) in surface soils, salinity (14-34 decisiemens per metre - dS/m), Al toxicity (8-103 ppm), low Zn and exchangeable Ca status, adverse physical and biological conditions with medium organic matter and poor tilth and activity of microorganisms limit crop growth. Embanking to prevent intrusion of saline or brackish water, improvement of drainage, applying lime to increase soil pH and flushing the embanked area with brackish water will reclaim these soils and make them suitable for producing more than one crop (at present only one crop is grown). However, the methods are costly and sometimes may not be economic also.

Saline soils  For saline soils the electrical conductivity (EC) of a saturated extract of the soil is more than 4 dS/m. The exchangeable sodium percentage is less than 15 and the pH usually is less than 8.5 because the salts are neutral. The sodium adsorption ratio (SAR) is less than 13.

Saline soils occur mainly in the Ganges Tidal Floodplain, Young Meghna Estuarine Floodplain and in the Tidal Floodplain areas of the Chittagong Coastal Plains and offshore islands. High salinity, low fertility with respect to organic matter, nitrogen, zinc and copper, scarcity of quality irrigation water during winter, variability in rainfall from year to year, short winter season, heavy texture (silty clay to clay) and perennial waterlogging due to inadequate drainage hamper crop growth. Cultivation of salt tolerant crops, mulching in the summer, improvement of drainage and prevention of intrusion of saline water from sea will improve these soils.

Alkali soils  In alkali soils, the exchangeable sodium percentage (ESP) is greater than 15, the electrical conductivity (EC) of a saturated extract is less than 4 ds/m, the pH is commonly 8.5 or less because of the presence of neutral salts and the sodium adsorption ratio (SAR) is at least 13.

Soils with dense and alkaline topsoils (pH >8.5) occupy very small areas among calcareous loamy ridge soils in widely scattered areas in the west of the Ganges River Floodplain. Topsoil alkalinity is the main problem. Breaking up the topsoil followed by cultivation of strong rooting grass for several years and application of sufficient organic manure will make the soil suitable for crop growth.

Peat soil  The soils occur in the Gopalganj-Khulna Beels, deep depressions in the Sylhet Basin and in the Northern and Eastern Hills. The bulk density of peat surface soil is only 0.20-0.30 gm/cm3. Low bearing capacity when wet, strong acidity, low nutrient status and perennial wetness are constraints for crop production. Drying the peat soils eventually leads to shrinkage and acidification. Control of drainage allowing the soil not to dry, making raised cultivation beds and embankment may make the soils suitable for vegetable crops.

Phosphate fixing soils  These soils include some Terrace soils developed on the Madhupur and barind tracts. Strongly acid soils rich in iron and Aluminium and calcareous soils rich in calcium are prone to phosphate fixation. Appropriate methods of placing phosphatic fertilisers, addition of farmyard manure or compost and foliar application of phosphatic fertilisers will reduce harmful effects.

Iron, Zinc and Sulphur deficiency  Iron and Zinc deficiencies occur only locally but may be widespread on the calcareous Ganges River Floodplain and sandy soils, peat soils, high pH saline soils and light textured Piedmont soils. Sulphur deficiencies in Bangladesh are acute and widespread in light textured and irrigated soils, where high yielding varieties are cultivated. The main causes are (a) increased use of high analysis sulphur free fertilisers like urea, TSP, (b) increased crop yield through HYV and (c) cultivation and continuous wetting of the soil. Application of zinc and sulphur containing fertilisers can easily eradicate zinc and sulphur problems.

Steeply-sloping soils  These soils occur widely in hill areas and in a small proportion of side valleys in the Barind and madhupur tracts. Unfavourable slopes (quite often steep to very steep), shallowness of the soils profile, severe droughtiness in the dry season, moderate to rapid permeability and susceptibility to serious erosion pose problems to crop cultivation. Forest trees are best suited for very steep to steeply sloping soils. Tea, Coffee, Rubber, Banana etc on low hills with gentle slopes and deep loamy soils, and jackfruits in similar soils are possible options. Attempts to increase organic matter, cultivation of cover crops wherever possible and leaving the soil surface barren as little as possible are steps to be considered for preserving the soil from any further destruction. Any alternative option would lead to catastrophe.

Shallow soils  Land with shallow soils (less than 50 cm deep) occurs in eroded part of the summits of the hills. Low fertility, low moisture status especially in dry season, insufficient space for proper root development and vulnerability to erosion limit crop production. Some parts are used for the cultivation of rice and others for dryland crops. Such lands should be kept under shrub, grass and dwarf bamboo in order to avoid soil degradation.

Poor drainage Soils with poor drainage occur in most of the active and meander floodplains and basins. Poor drainage develops unfavourable physical, chemical and biological conditions. Soils become devoid of oxygen, with consequent evolution of other gases such as carbon dioxide, methane and nitrogen, which affects upland crop production adversely. These soils are, however, suitable for rice cultivation and need drainage improvement for upland crops.

Soils with ploughpan Ploughpan is a dense soil layer occurring below the cultivated topsoil caused by pressure from the sole of the plough. Ploughpan is found in most soils, specifically in silt loam soils, which are cultivated in a wet condition and are puddled, for transplanted rice cultivation. It is advantageous for rice cultivation but provide limitations for upland crops. For cultivation of upland crops, ploughpans should be destroyed by using a deep plough. However, for cultivation of rice and upland crops in the same field in rotation, the ploughpan could be developed at a deeper depth using deep ploughing equipment.