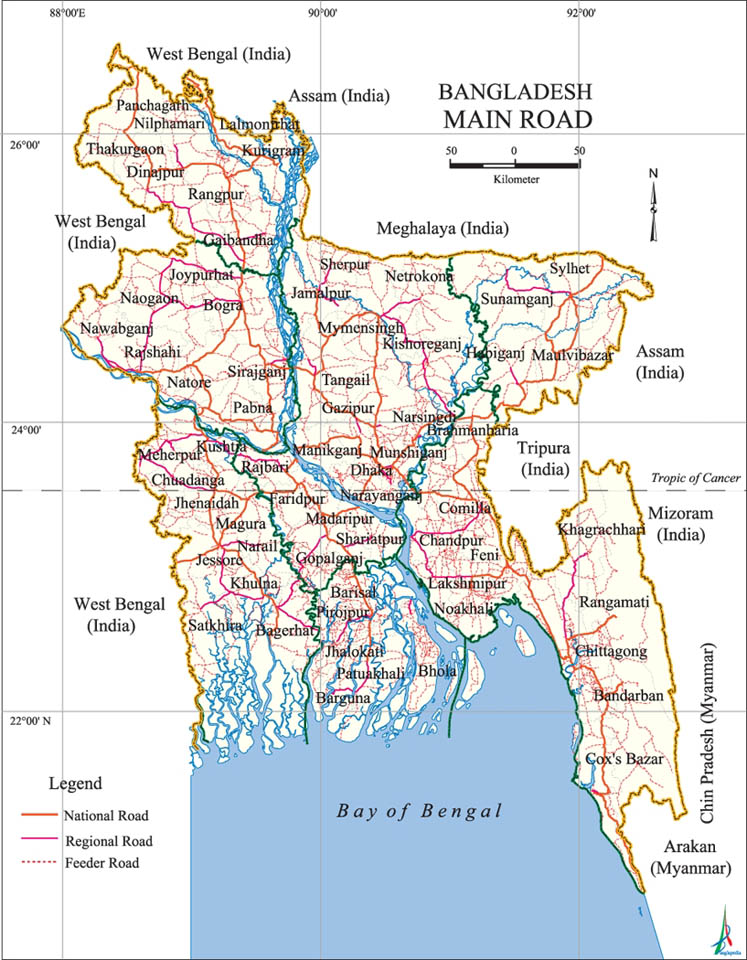 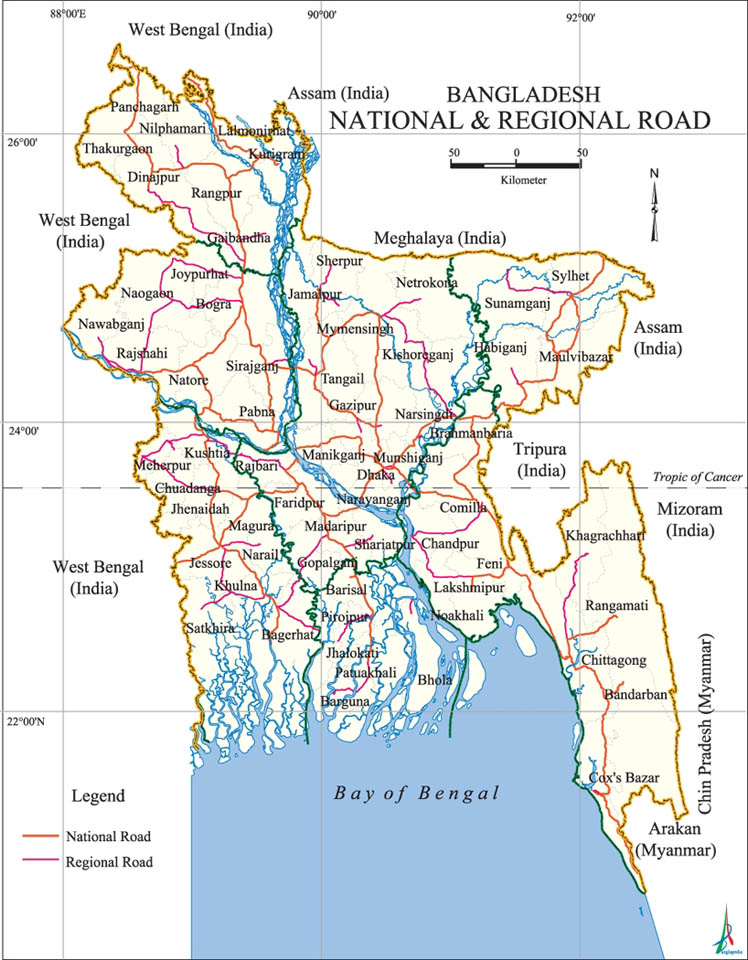 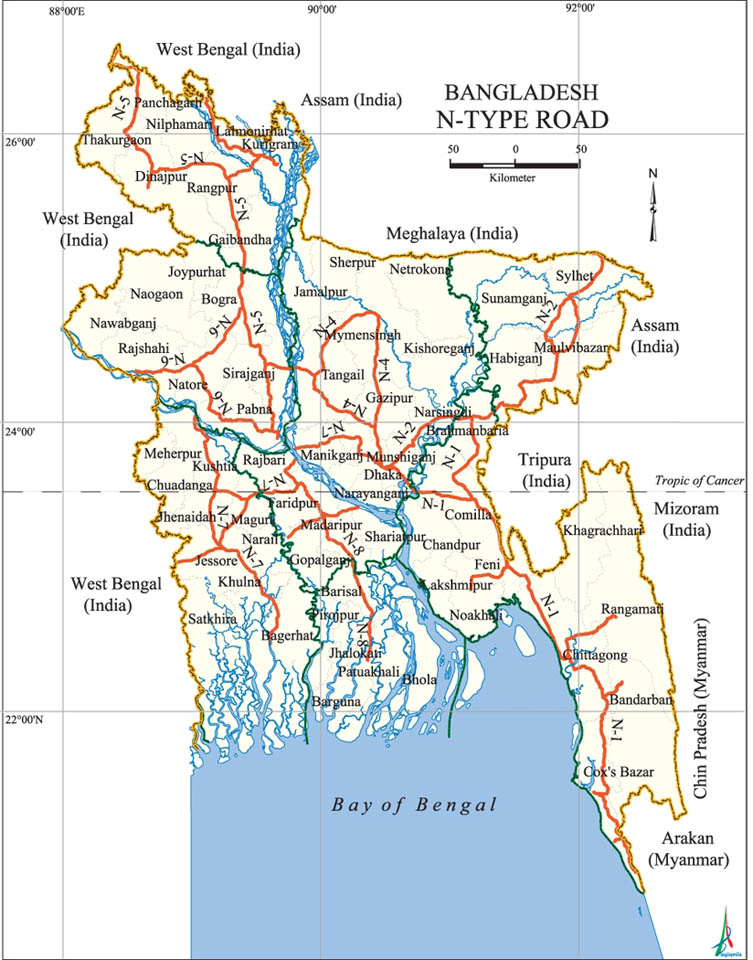 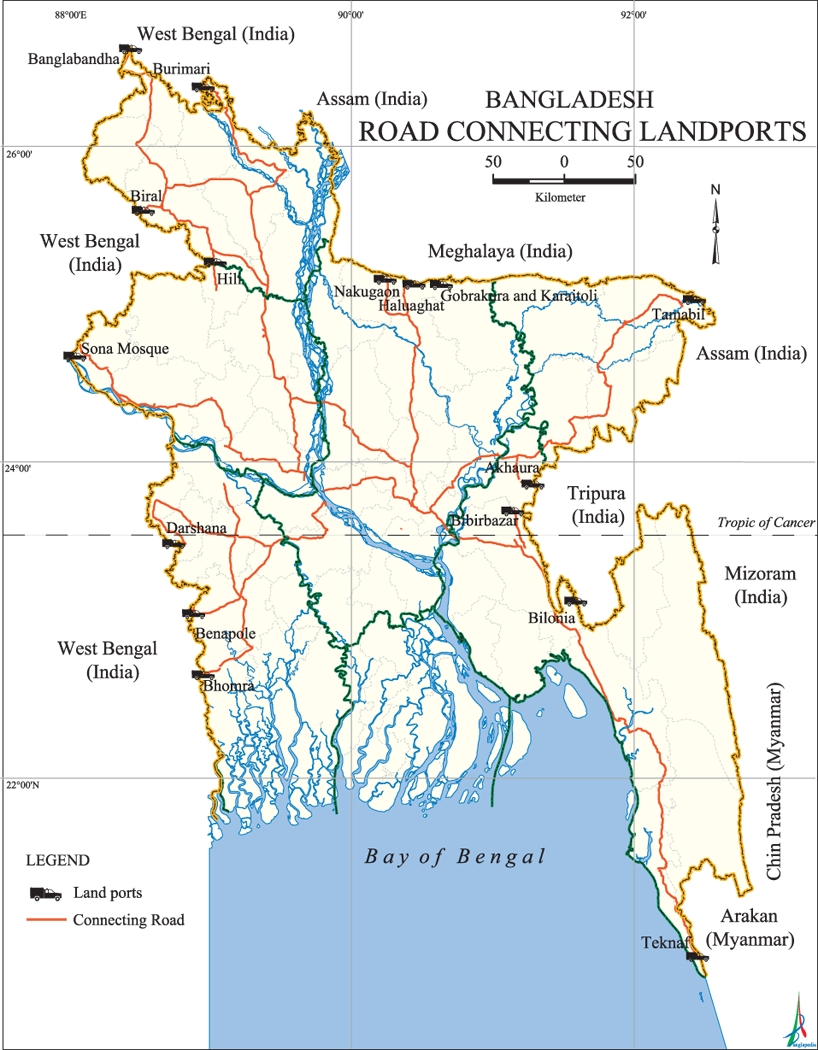 The Mughal emperors developed some military and commercial roads and highways, most of which went out of use by the end of the 18th century. Most famous among them was the grand trunk road constructed originally as the Sonargaon Sarak. Dhaka was connected with nearby districts by good roads, which is evidenced by the remains of bridges at Tongi and Pagla built by Mir Jumla in 1661. There had been little development of roads and highways in the Bangladesh territory during the British period. In 1947, the total length of pucca (metalled) road of good quality in East Pakistan was less than 480 km. Prominent among such roads was the one stretching 56.32 km between sylhet and Tamabeel. The total length of kacha (unmetalled) roads in the province at that time was 36,000 km. There had been a relatively fast development of roads and highways after 1947 and by 1970, the province had 3,860 km of pucca roads. The achievements of Bangladesh in the first two decades after its independence were quite impressive. In 1985, the Roads and Highways Department had 5,404 km of pucca road of all kinds and 3,112 km of kacha road. Around this time, pucca roads under the district councils and municipalities totaled about 9,000 km and the kacha roads about 15 million km. The total length of pucca roads in Bangladesh was 20,947.73 kilometre in 2010.

There were only 4,380 motor vehicles in East Pakistan in 1947. The number of motor vehicles rose to 133,253 in 1985. Despite this increase in number of vehicles, the figure on persons owning vehicles in 1985 remained almost unchanged at the vicinity of 12,000. Thanks to massive activities of the Local Government Engineering Division in construction of rural roads and increased involvement of private sector in the road transportation business the situation with road transport had undergone rapid changes in the 1990s. Town services as well as inter-city bus transport and private taxicab services significantly improved through introduction of many large bodied modern buses. The roads and highways were upgraded by renovation and extension. The number of different types of registered vehicles plying in the roads of Bangladesh in June 2011 was 15,96,000 including buses and minibuses, 94,298 microbuses, 87,182 trucks, 215,786 cars, 12307 taxis, 191,153 autorickshaws and 848,372 motorcycles.